From China to India, Asia braces for EU plan to kill fast fashion

(the Nikkei Asia) BENGALURU/HONG KONG/HO CHI MINH CITY — European regulators have declared war on “fast fashion,” forcing a rethink of the throwaway culture that has dominated the 21st-century clothing industry and promising to rejigger sartorial supply chains that reach deep into Asia.

Proposed rules from the European Union would force companies to overhaul their clothing designs to meet a laundry list of criteria governing everything from how long a garment lasts, to how much recycled yarn it contains.

The aim is to reduce the environmental impact of the industry by increasing durability. It could spell the end for low-quality synthetic fiber, shoddy sewing and other production shortcuts — and for apparel that falls apart in the wash. In other words, the decline of quick, cheap, mass-produced clothes.

“The impact to environment is not directly seen. It’s accumulated from a thousand — or a million, a billion people,” said Institute for Circular Economy Development Director Nguyen Hong Quan. Under the EU rules, he hopes the high-volume business of fast fashion will give way to a production model that keeps resources circulating through reuse. “You can make something [of] beauty from recycled material.”

In recent years, the EU has tried to use its heft as a large market to move the needle on many green goals, from a carbon border tax to extended producer responsibility for electronic and plastic waste. Its textiles strategy, which the European Commission (EC) presented to a parliamentary committee on May 17, is the latest in those efforts. 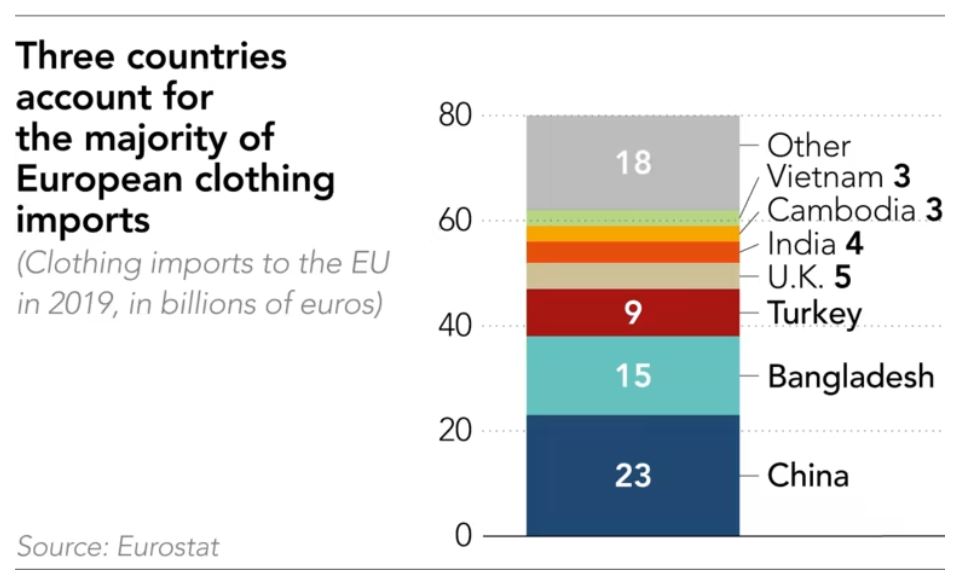 In its strategy document, the EC said it will introduce rules to combat “overproduction and overconsumption of clothing.” It targets an industry that has been thoroughly dressed down by critics for pollution in landfills and in the air, thanks to greenhouse gases emitted in making finished clothing and polyester.

Fast fashion refers to a modern industry of disposable attire built around rapidly shifting consumer tastes. It is underpinned by both fashionistas, who are willing to wear a purchase just once, and manufacturers that rely on low-cost materials and labor for a quick turnaround before the next trend catches fire.

Global apparel production doubled from 2000 to 2014, a period during which the average person bought 60% more clothes but kept items only half as long, according to management consultancy McKinsey.

In the past two decades, prices have fallen as companies switched to fossil-fuel-based synthetic fabrics, which tend to cost less than cotton, and offshored production to Asia, which became the top exporter of clothes to Europe and the rest of the world.

Brands like Decathlon, Uniqlo, and H&M say they are working with Asian producers from China to India to prepare for the new rules from Brussels, but not everyone is on board. “This could cause confusion and incur delays,” a Guangzhou supplier to major retail brands told Nikkei Asia. “Manufacturing here is all about being cheap and fast.” 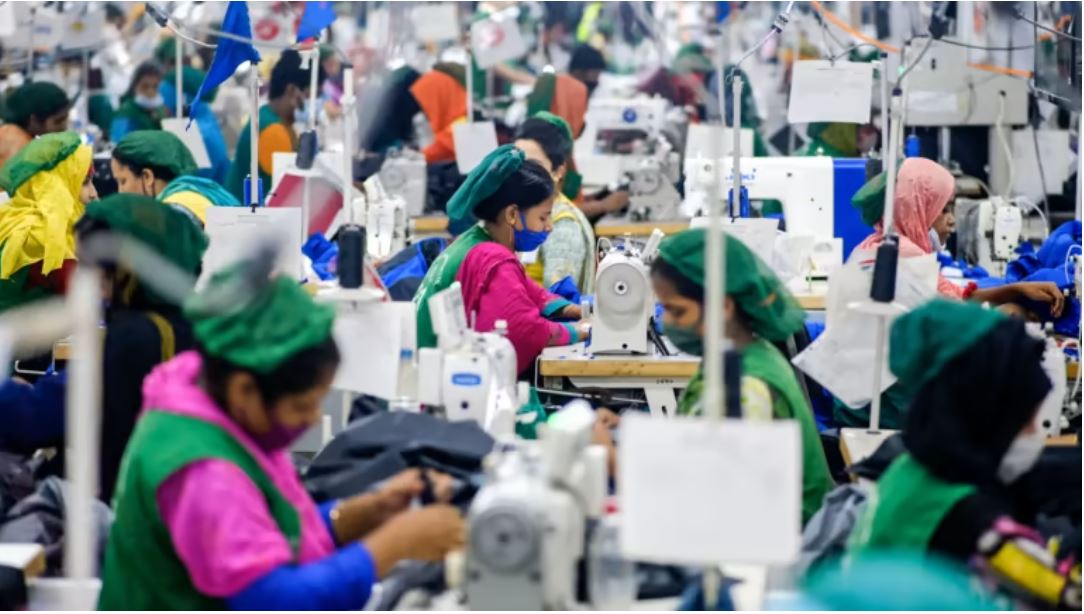 Garment workers sew at a factory in Savar, Bangladesh.    © AP

Supporters in the industry say the EC’s plans would level the playing field by moving the whole sector toward long-lasting garments.

“Industrywide policies should support companies to decouple growth from virgin resource use,” said Pernilla Halldin, head of public affairs for H&M Group. She said all H&M products should be designed for recycling by 2025 and welcomed the “granularity” of the EC plans, which also covers other textile goods, from shoes to carpets.

That level of specificity suggests the EC will introduce detailed criteria — down to the zipper — that companies will have to meet in order to sell to EU consumers. Details are pending, and will have to win approval from the European Parliament and EU member governments before coming into force, which the commission envisages will happen in 2024 for the most significant rules. But the three key changes under consideration are clear.

First, the strategy document says, there will be standards for “durability, reusability, reparability, fiber-to-fiber recyclability and mandatory recycled fiber content.” Second, businesses will have to print related data, such as a reparability score, on clothing labels. Third, the EU may ban companies from throwing away unsold goods, or require them to report how much they discard. 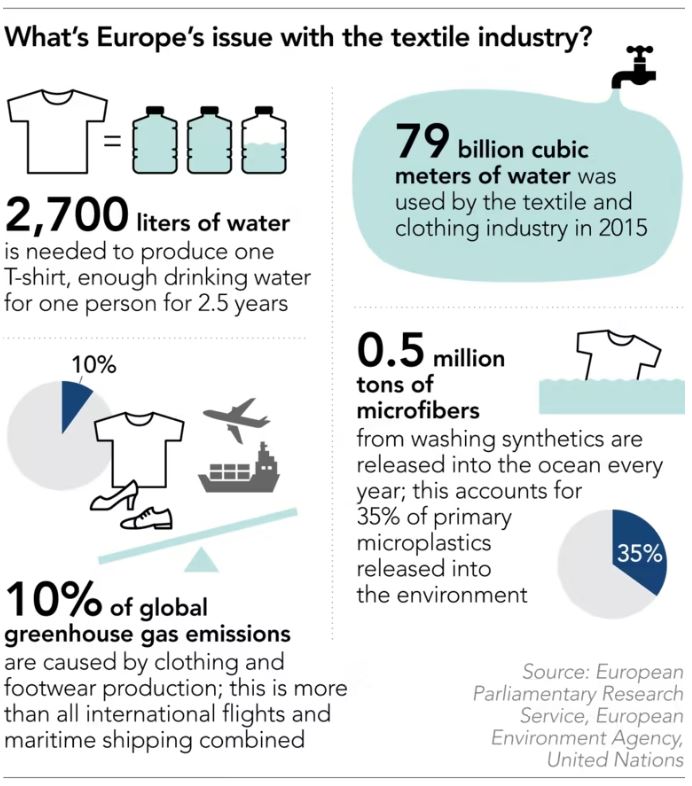 Uniqlo said it is already compiling data, including on carbon emissions and traceability. The Japanese casualwear maker is tracking the EC proposal and plans to work with Asian suppliers on implementation.

“As part of the efforts to allow customers to purchase our products with peace of mind, we are also working to consolidate information on safeguarding human rights, and measuring [the] environmental impact of our supply chain,” a spokesperson at Uniqlo owner Fast Retailing told Nikkei Asia.

While the textiles strategy focuses on the environment, the EC said it will be combined with social initiatives. For example, in February, the commission said it would introduce supply-chain rules requiring corporations to root out “adverse impacts of their activities on human rights, such as child labor and exploitation of workers.”

Allegations of slave labor in China’s Xinjiang Province prompted the U.S. to seize a consignment of imported Uniqlo shirts that it suspected contained cotton from the province. (The company said it has not found slave labor in its supply chain.) Some other buyers have snipped ties to Xinjiang.

In the textiles sector, Asian factory sources expect costs to go up under the EU rules, with the garment supplier in Guangzhou estimating as much as a 50% increase to switch to certified recycled materials. Some manufacturers note the movement of raw inputs is opaque and certificates are easily forged, while others say adding sustainability data to labels would not be difficult. 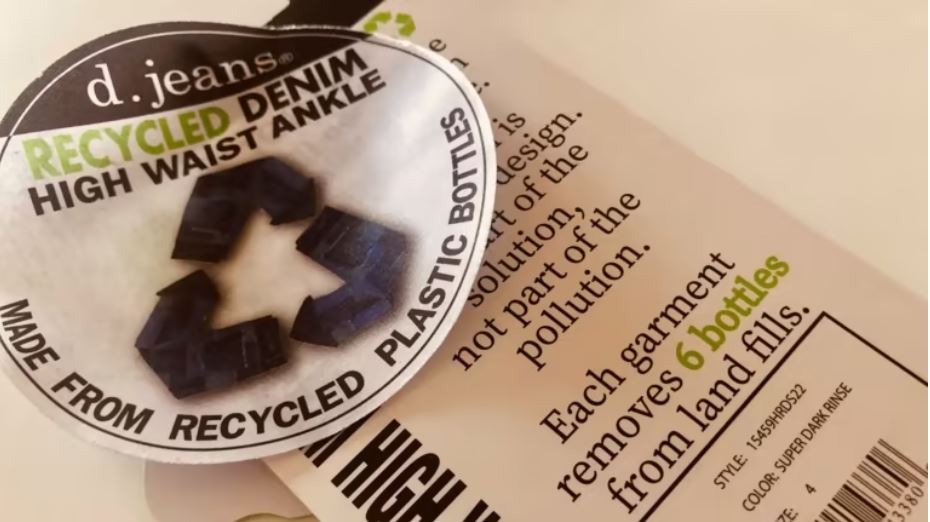 Clothing tags are starting to highlight the use of recycled materials. McKinsey says less than 10% of global textiles are composed of such materials. (Photo by Lien Hoang)

Skeptics wonder whether the EU rules are a cover for protectionism or amount to “greenwashing” — where brands make empty eco-friendly claims.

“One has to look at it very carefully as to whether it is out of a genuine concern for the environment, or is it a form of a tariff barrier,” said Rahul Mehta, an apparel industry veteran and member of the Clothing Manufacturers Association of India. He told Nikkei that “materials have to be replaced, processes have to be reworked, new technology may have to be adapted.”

The EU is the world’s biggest clothes importer, its top five sources being China, Bangladesh, Turkey, the U.K., and India, according to Eurostat.

In Vietnam, another major exporter, sportswear brand Decathlon and the Vietnam Textile and Apparel Association are among the groups urging factories to adapt in anticipation of the EU rules. Just 5% of the domestic industry currently meet the criteria, state broadcaster VTV reported.

Dr. Nguyen Hong Quan of the Institute for Circular Economy Development, which is based at Vietnam National University, said shoppers want these options, but currently lack them. Retailers have only recently begun testing options to stretch their merchandise’s longevity: At some H&M stores, customers can drop off old clothes for a discount on their next purchase; Uniqlo offers on-site repairs at some locations. 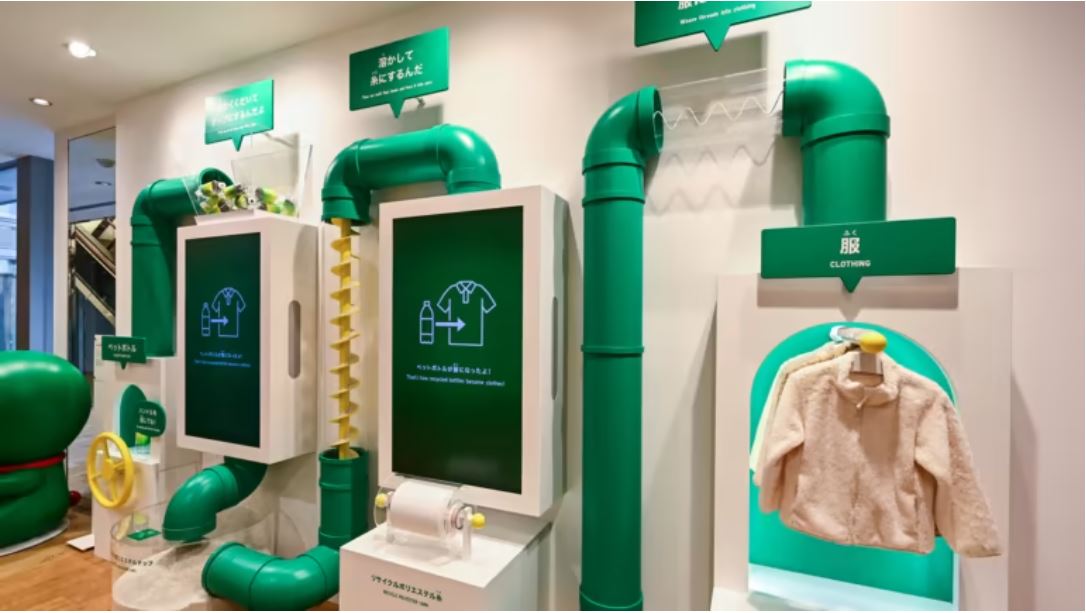 A display at a Uniqlo’s store in Tokyo’s Ginza shopping district shows how clothing is made from recycled plastic bottles. (Photo by Shihoko Nakaoka)

Fast fashion is not an endangered species yet. The queen bee of the space, China’s Shein, still releases as many as 7,000 products a week, more than Zara does in a year. But more broadly, the mood of buyers is shifting.

“Consumer attitudes are changing in the wake of the pandemic, as many embrace a ‘less is more’ approach,” McKinsey said in its annual State of Fashion report, saying its survey showed 65% of shoppers “plan to purchase more long-lasting, high-quality items, and overall, consumers considered ‘newness’ one of the least important factors in making purchases.”

The consultancy warned companies thus “need to decouple from current volume-driven measures of success,” switching to inventories that have higher margins, or are more likely to sell. It cited case studies from Reebok, which finalizes products based on consumer votes, to Louis Vuitton, which is increasing its made-to-order business. The change in tactics is meant to reduce the stock that ends up parked on shelves or shipped to the dump.

“People see the waste in the landfills, in the ocean, in the rivers, but they don’t see their responsibility,” Quan said in a video call. “That is the problem.”

From Vietnam to India, businesses expect the profit motive will force them to adopt the EU standards.

“That’s the way the world is moving, whether we like it or not,” said Mehta, the Indian industry veteran. “And I guess if we have to remain in the market, we have to follow what the buyers’ needs are.”